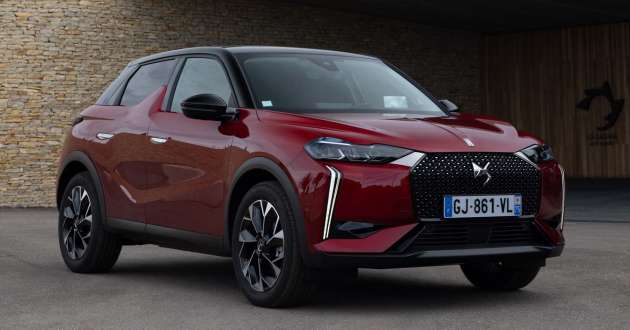 The facelifted DS 3 compact crossover has made its debut, continuing to bring both fully electric and internal combustion powertrains – as with the pre-facelift model – from launch ahead of its public premiere scheduled to be at the Paris Motor Show.

Built exclusively in Poissy, France, the DS 3 brings mild revisions to an exterior that already wrought considerable flair, with changes notably to its front fascia where the vertical DRLs and headlamps have been mildly revised, and the grille too has been updated to feature its pins with more prominence.

Viewed in profile, the aesthetic changes are even more sparing, and the pure EV E-Tense variant gets a new wheel design in 17- and 18-inch sizes. The kink in the character line across front and rear doors continues to feature, as does the reverse ‘shark fin’ at the base of the rear door window.

Mechanical specification for the zero-emissions DS 3 E-Tense is where the changes to the DS3 are more apparent, where the EV gets a completely new electric motor according to the DS Automobiles; this operates at 400 volts and produces 155 hp and 260 Nm of torque, up from the 136 PS of before while torque output remains the same.

Energy storage has been marginally increased with the DS 3 facelift. Compared to the 50 kWh battery of the pre-facelift model, now featuring a 54 kWh battery (51 kWh usable capacity) that gains thermal control through liquid circulation and a heat pump to improve range and lifespan.

For the internal combustion powertrain line-up, the facelifted DS 3 is offered with a choice of two petrol powertrains; the PureTech 100 with six-speed manual transmission, and the PureTech 130 with an eight-speed automatic. In comparison to the pre-facelift range, the PureTech petrol variants are closest to the versions of the 1.2 litre three-cylinder petrol engine which output 100 PS or 130 PS.

The interior of the DS 3 facelift essentially carries over the aesthetic of the pre-facelift model’s cabin, replete with its angular, diamond-like cues. The driver gets a seven-inch instrument panel and a head-up display while infotainment comes courtesy of a 10.3-inch high-definition central screen.

The setup offers the DS Iris System connected navigation and intelligent voice recognition capabilities, which enables a customisation of the central screen, and device mirroring can now be done wirelessly.

The full range of the DS 3 facelift gets connected services via the MyDS app, which, in the case of the full EV E-Tense, shows the range and state of charge, and offers control of programming and thermal pre-conditioning. This also allows the user to search a navigation destination and send it to the vehicle, while a Trip Planner function highlights charging locations.

In Malaysia, the pre-facelift DS 3 Crossback (the updated model drops the Crossback moniker) was sighted towards the end of 2021, though that model didn’t make its local debut. This was before Citroën and DS brands turned to the Bermaz umbrella; might the facelifted DS 3 make it to our market this time?