Who Will Be A New Wonder TEHRAN: Iran’s sports minister has ordered a probe into allegations of sexual assault targeting teenagers at a football academy in the country’s northeast, state media reported Saturday.
“A former media manager for the Shahr Khodro football team has claimed on social media that the parents of 15 players from this club and its academy have filed a complaint against the club and its coaches for sexually assaulting their children,” state news agency IRNA reported.
The report did not specify the gender of the minors targeted in the alleged assaults. 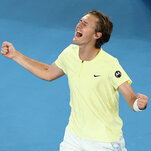 Who Will Be A New Wonder Woman After Gal Gadot?