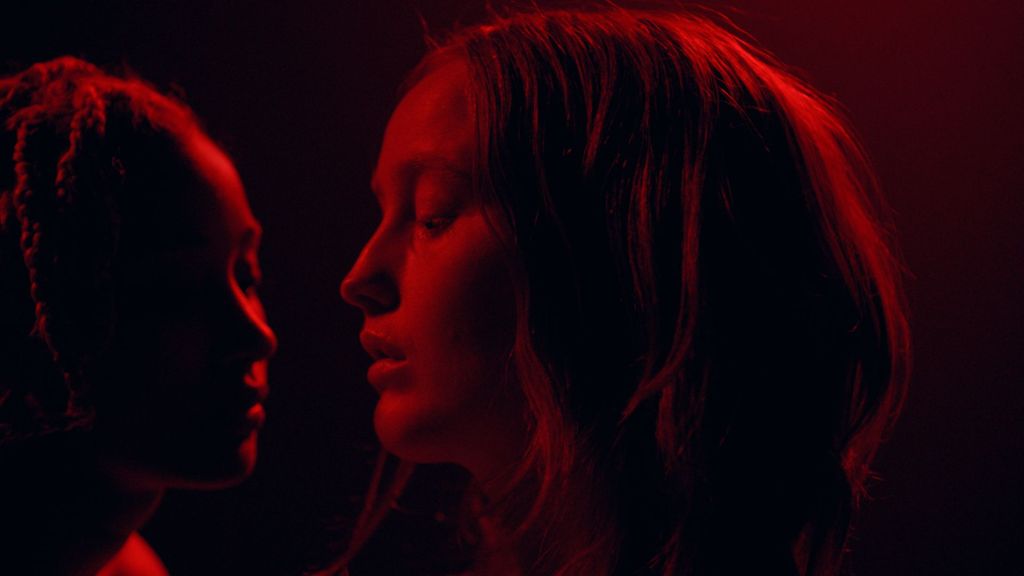 ComingSoon Editor-in-Chief Tyler Treese spoke with My Animal director Jacqueline Castel and star Bobbi Salvör Menuez about the supernatural queer romance drama’s Sundance premiere and filming in Timmins, Canada. My Animal premieres this Sunday at the Sundance Film Festival with a midnight showing.

“Heather, an outcast teenage goalie, longs to play on the hockey team of her small northern town. She meets and falls in love with newcomer Jonny, an alluring but tormented figure skater,” says the synopsis. “The girls’ relationship blossoms despite Heather’s struggles with her alcoholic mother, her hidden sexual orientation, and a familial curse that transforms her into a feral wolf under the full moon. Heather and Jonny’s secret tryst soon clashes against the conformity of their small community, exposing dangerous truths and igniting a passionate, violent night of personal transformation.”

With Sundance coming up, what’s your excitement level for the premiere? It has to be so exciting to be a part of such a fantastic festival.

Jacqueline Castel: Yeah, I mean, I don’t know if it’s all hit me yet, because I was finishing the movie up until last Wednesday, so it’s like we got our DCT and the [quality control] done last Wednesday, and then I immediately flew home to New York from Toronto. Then I’ve just been like, prepping to get ready to leave. I think it hasn’t, I don’t know if it will like totally hit me until I’m there that it’s happening. It all feels pretty surreal at this point because everything’s happening very whirlwind. So yeah, I’m very, very excited. But I don’t think it will really hit me what’s happening until I’m there at the premiere and I’m like, “Oh, here I am. This actually happened. It’s not like a dream.”

Bobbi Salvör Menuez: It feels really good to be here. I’ve been to this festival before, but never as the lead of a project. I think also just this being the first year that it’s fully back in person since 2020, there’s just a real energy going around down Main Street and everything. There is such a great energy and there are so many films I’m so excited to see and I feel so excited to have our film alongside. And yeah, I’m very excited for the premiere Sunday. I actually decided to wait to watch the film until the premiere, so that’s gonna be probably like a bit of an emotional rollercoaster Sunday at midnight. The only downside is that we don’t have Amandla here, but we feel you here in spirit.

Jacqueline, I love the small town setting. Can you speak to why you went in that direction? I think it gives the film a very distinct feel.

Castel: I think that was inherent to the script itself. But I also grew up in a lot of weird places. I’m American, I’m also Canadian, I’m also French, I had family that … we kind of moved all over the place. I grew up in small towns like Topeka, Kansas, and Reno, Nevada. There’s something that I just really know about that kind of town and what it feels like to be raised in a town like that and how difficult that can be when you feel like you don’t fit into that world. Then how that defines you as an individual and how it shapes you.

So I see the location itself as a character and I was really specific on my location scouts to find a world that really felt true to what I was trying to capture in this kind of lost-in-time location. I don’t know, I think that’s a really interesting place to jump off from in terms of shaping the world that your character is living in.

Bobbi, how was it filming in Timmins, Ontario?

Menuez: You didn’t have to fake that feeling of like, “this is a tiny little world and there’s no escape.” Like it was, it was really felt, and the intensity of winter. It was one of the harshest winters on record for some decade or decades. I think also it was kind of special that it was a town that things haven’t really filmed in. So, it’s really different than working on a lot or something. It really helped make things feel real, which is always such a joy for a performer to have the locations be so charged and connecting with people in the town or locals on crew. It just adds to the realness of the experience, which is always such a benefit to performances, I think. Erling Haaland, system-based teams and the role of the goalscorer | Jonathan Wilson